Donburi (or don) is the ultimate Japanese comfort dish. A big, hot, steaming bowl of rice topped with... well... pretty much anything you like! The beauty of donburi is that it's simple, versatile and delicious.

Here are 12 of the best Japanese donburi rice bowl recipes that will make you say "Umai!" (YUM!) 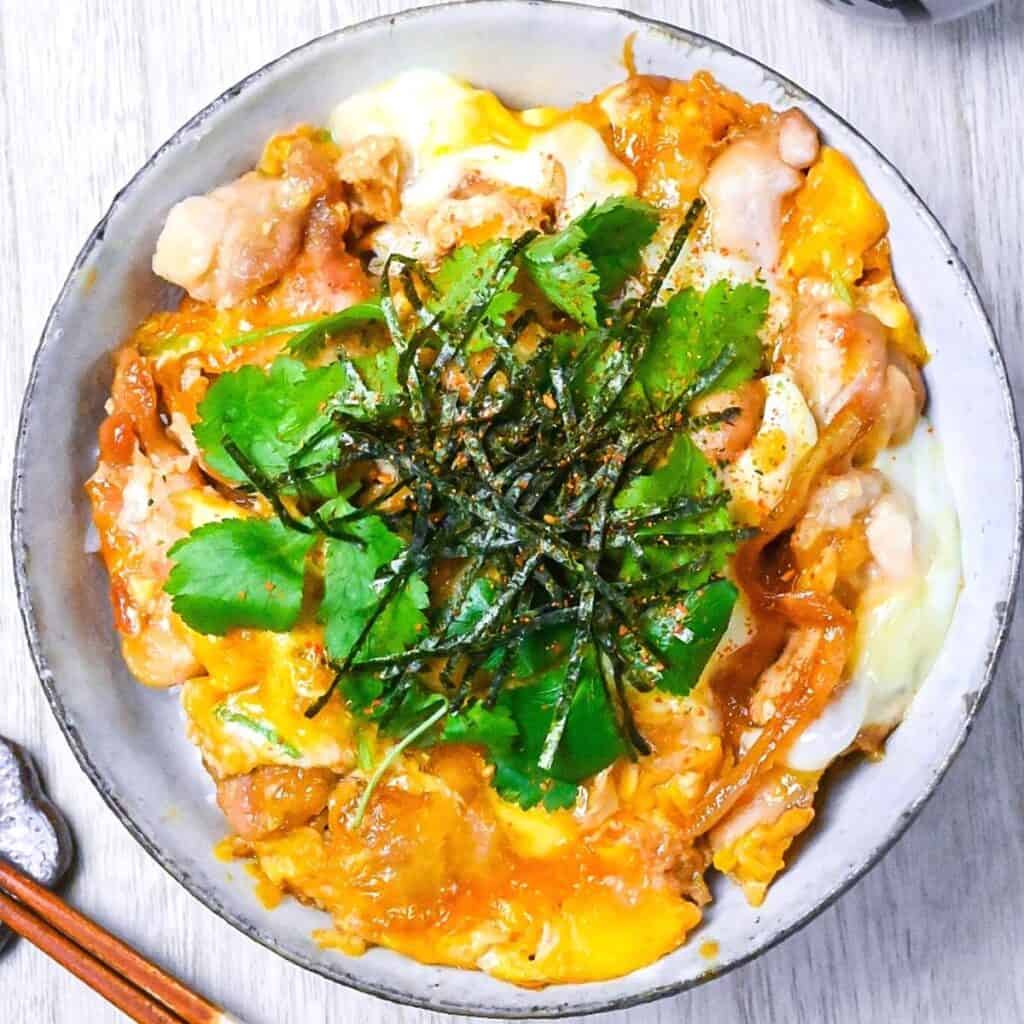 Oyakodon is such a classic donburi recipe that every Japanese person loves! It is said that Oyakodon came around in the Meiji period (1868-1912) or maybe even earlier. It is one of the oldest donburi recipes, coming second only to Gyuudon.

Made with succulent chicken thigh, soft onions and fluffy steamed egg served over Japanese rice, oyakodon is a comforting dish that you can easily make at home. A very quick and humble recipe, good for a quick lunch or a hearty dinner! 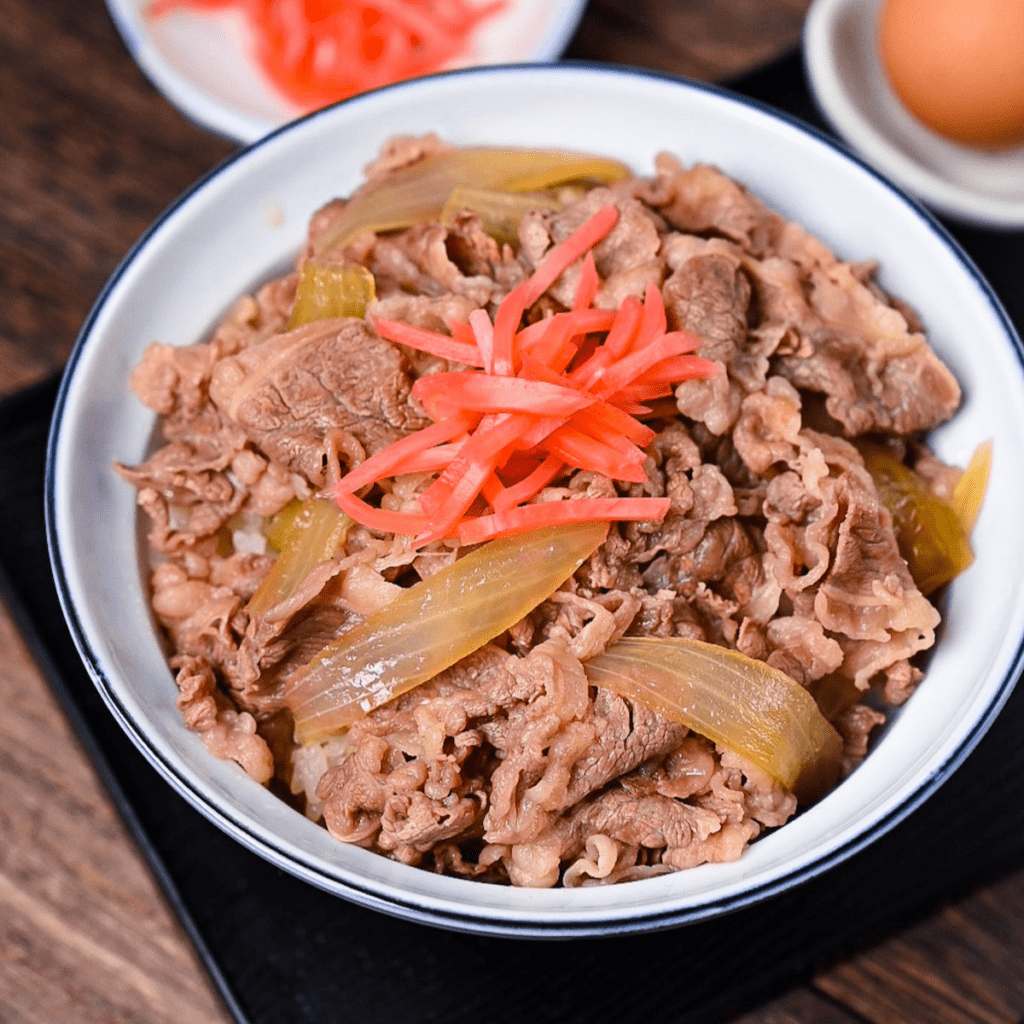 The history of gyudon goes all the way back to Meiji era but in modern days, Gyudon is widely considered as "fast food" in Japan. It's commonly served in popular diners in Japan.

Thinly sliced beef cooked in a delicious dashi sauce with simmered onions, served on a bed of fluffy Japanese white rice. It's cheap and quick to make, not to mention delicious! Could it be any more perfect? 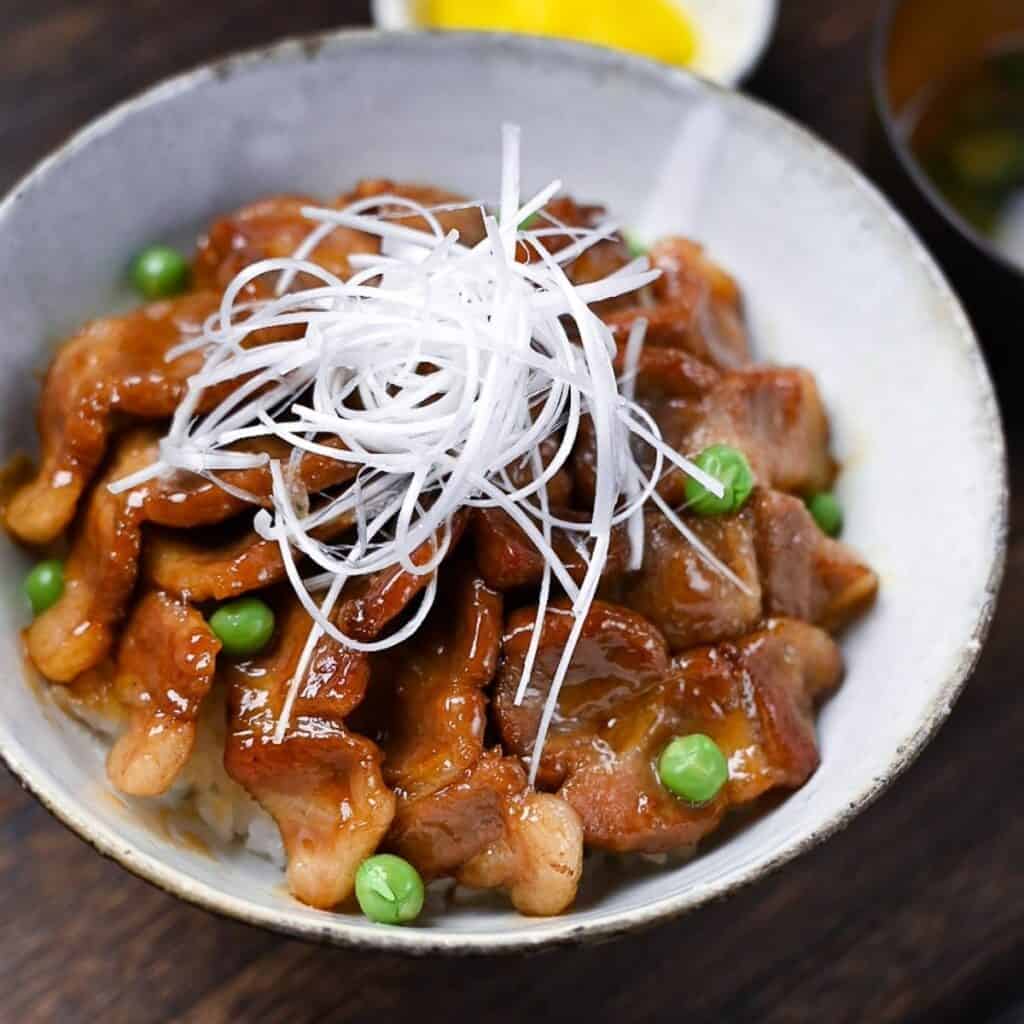 Chicken, beef...how about donburi with pork? Butadon is not as popular as Oyakodon or Gyudon, but certainly is something you should consider making!

Succulent pork belly fried in a caramel soy sauce glaze served with shredded spring onions and green peas, this recipe is based on Tokachi (Hokkaido) style Butadon and is in a league of its own. A simple choice that is packed with flavour! 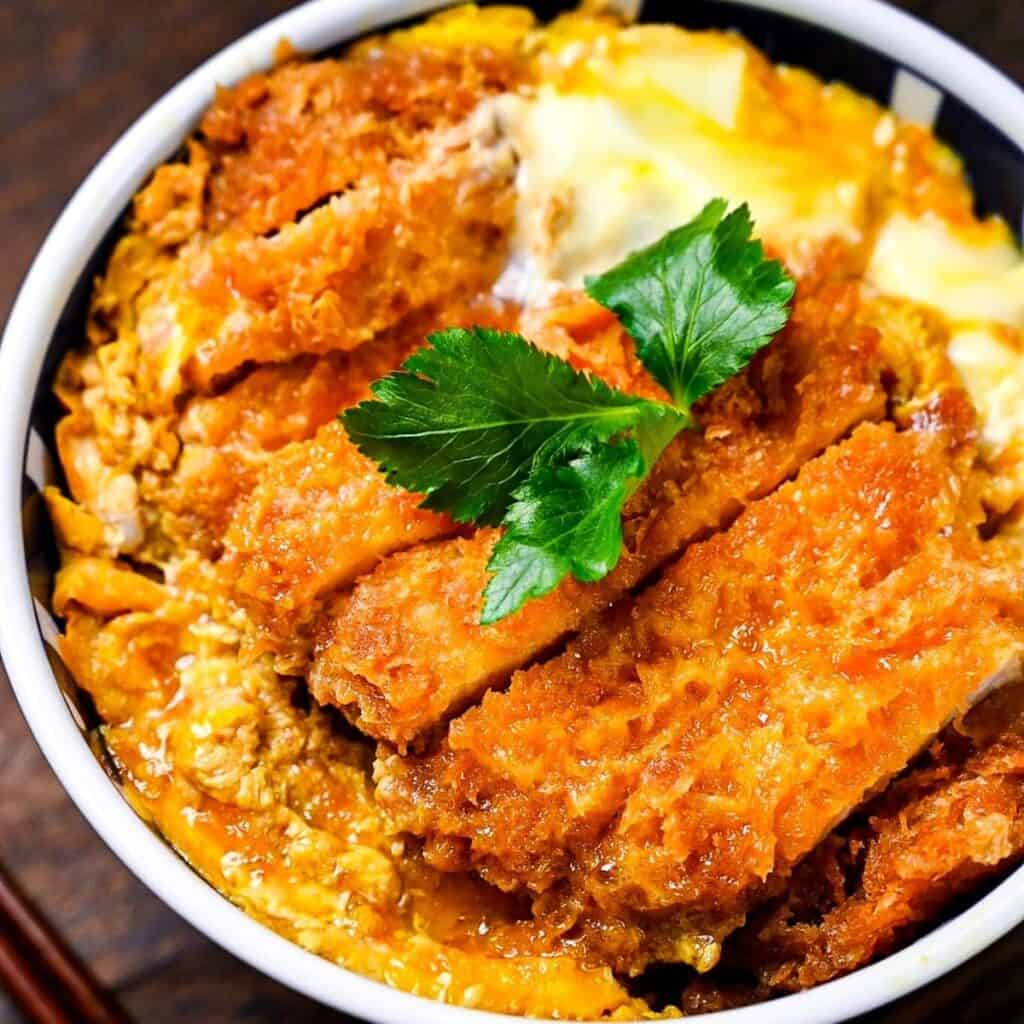 If you're feeling like treating yourself or eating something decadent, Katsudon is THE DONBURI for you.

It's somewhat similar to Oyakodon but you swap out the chicken, and replace it with a deep fried pork cutlet instead! The rice is warm and fluffy, the egg is sweet, the onions are soft and the katsu is still crispy! It's the ultimate texture combination and pretty much perfection in a bowl! 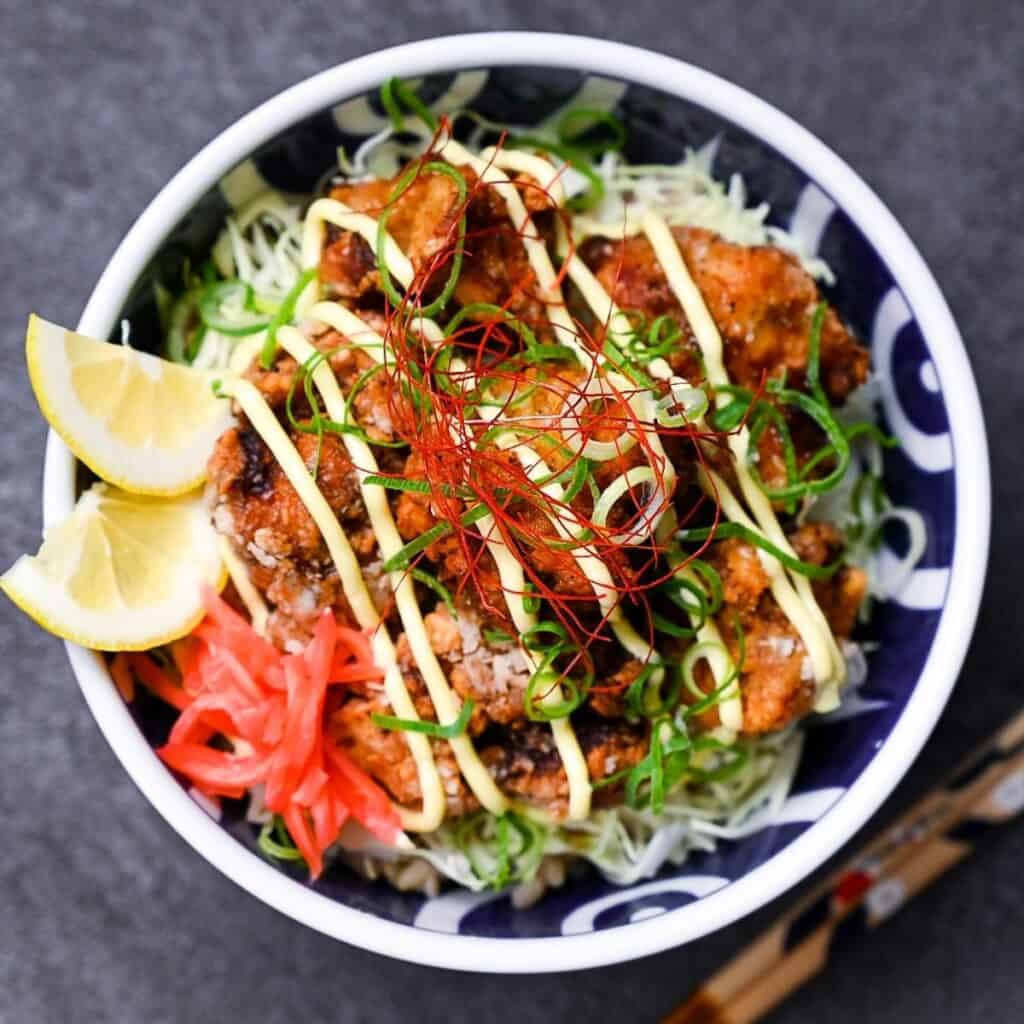 Now, here comes my personal favourite. My mouth is watering just by thinking about it! Crispy karaage (Japanese fried chicken) + Rice bowl... What more can I ask for?

It's not a traditional dish like above 4, but certainly something you shouldn't miss! This is something I personally could eat every single day.

Okay two deep fried donburi in a row, I should calm down here... So here is a classic "Sanshoku donburi" The name of this dish is a bit of a mouthful, but "sanshoku" (三色) simply means "three colours" and represents the 3 main ingredients to top this dish, chicken, egg and spinach.

Because it's a colourful dish, this is also a popular option for a bento box (lunch box). You can sometimes find it in Japanese convenience store's bento boxes too. A wholesome donburi option for sure. 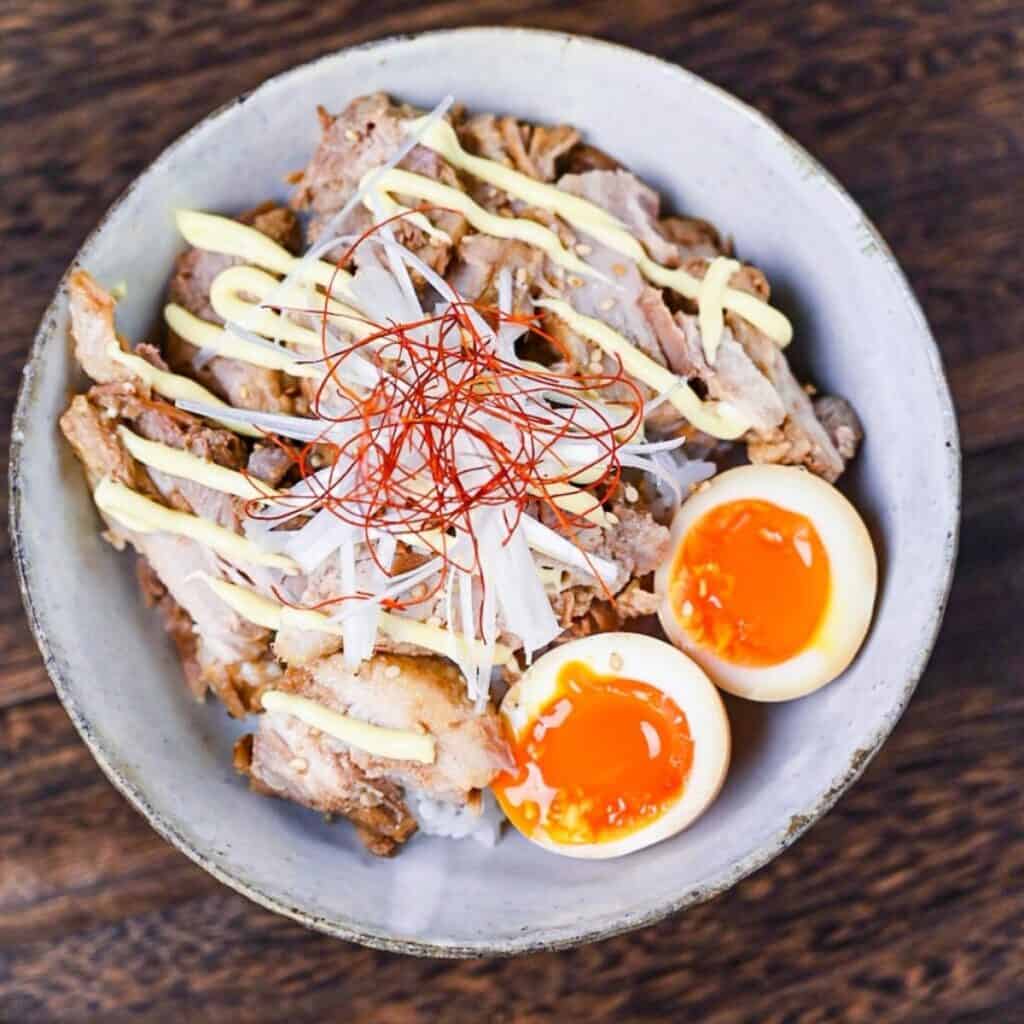 Chashu doesn't need to be limited to ramen! Why not use succulent Japanese pork chashu and favourful ramen eggs to make this delicious rice bowl?

As you can imagine, ramen restaurants make chashu in big batches every single day. The end cuts are not suitable for serving on ramen, but there's no need to waste it either! That's why end cuts of chashu are often used to make chashu don or fried rice for the workers.

Yakiniku don is a dish where grilled meats (yakiniku) are served on top of a bowl of rice with yakiniku sauce, maybe served with a few vegetables.

I kept this recipe very simple and easy. You don't need premade yakiniku sauce, or specially cuts of yakiniku meats to make yakinikudon at home. You can consider this as steak on rice with a tasty Asian sauce! That's pretty much what it is! 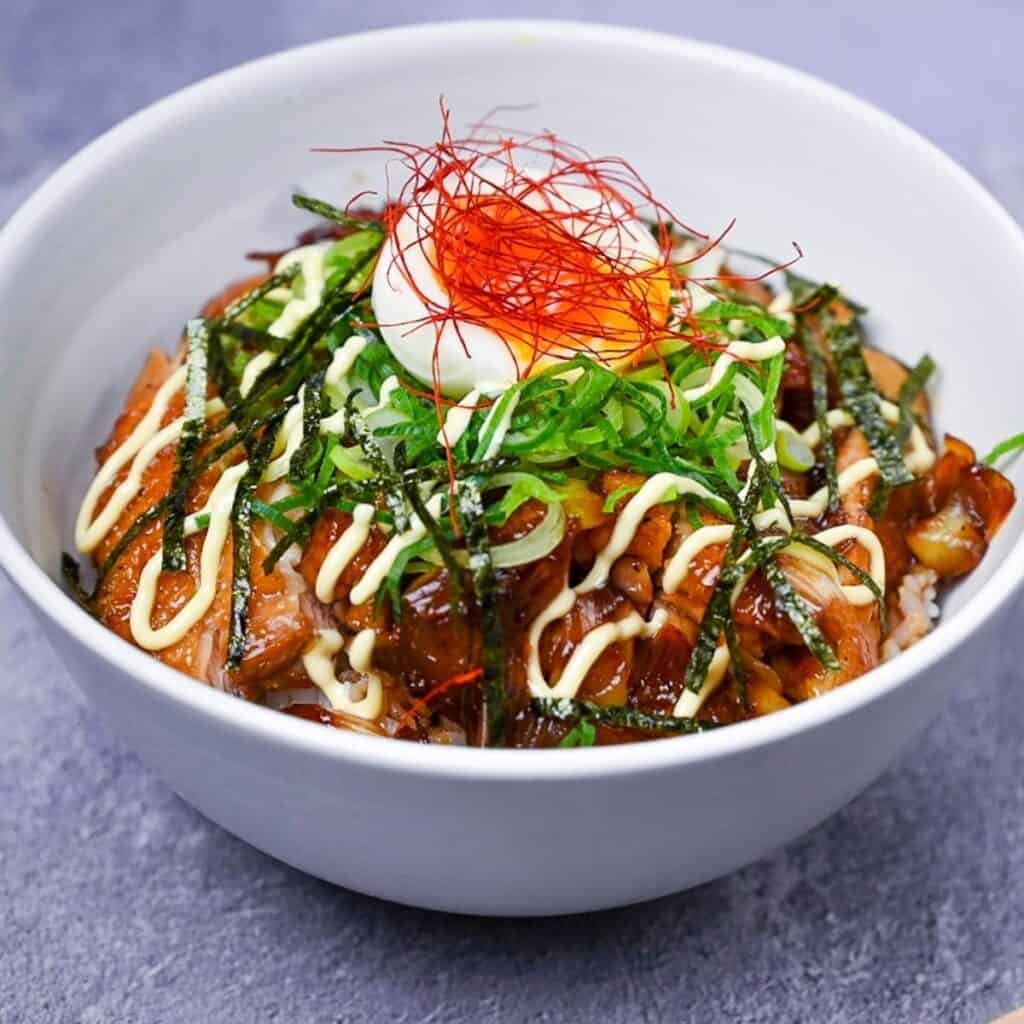 Teriyaki（照り焼き）is a method of cooking using a sweet soy sauce based sauce. Teriyaki sauce is often used for chicken and fish (often yellowtail is used in Japan) but of course you can use the technique for pretty much anything!

This delicious teriyaki chicken donburi is flavoured with garlic for an extra burst of flavour and served with spring onion and mayonnaise. It's quick and easy to make too!

Tender sashimi grade salmon soaked in a delicious Japanese marinade and served with crunchy cucumber and fresh avocado over rice. This salmon donburi is refreshing, filling and super quick to make!

This is actually one of my go-to recipes when I don't feel like cooking. It's refreshing yet satisfying and filling too. Whether it's summer or winter, for lunch or dinner, this dish is perfect anytime! You can check how to make the marinade and steps in the recipe below!

Next donburi I'm going to introduce in this dish that gained popularity through the world of Anime! Chaliapin steak (シャリアピンステーキ) is a super soft steak that has been marinated in grated or finely chopped onions to make it extremely tender, and then served topped with onions and a rich red wine sauce.

Chaliapin Steak became famous through an anime called "Shokugeki no Soma" (食戟のソーマ), also known as "Food Wars!" in English. The recipes featured on there create a lot of hype online and even though they're animated, you've gotta admit that they look so delicious, you've just gotta try them in real life! 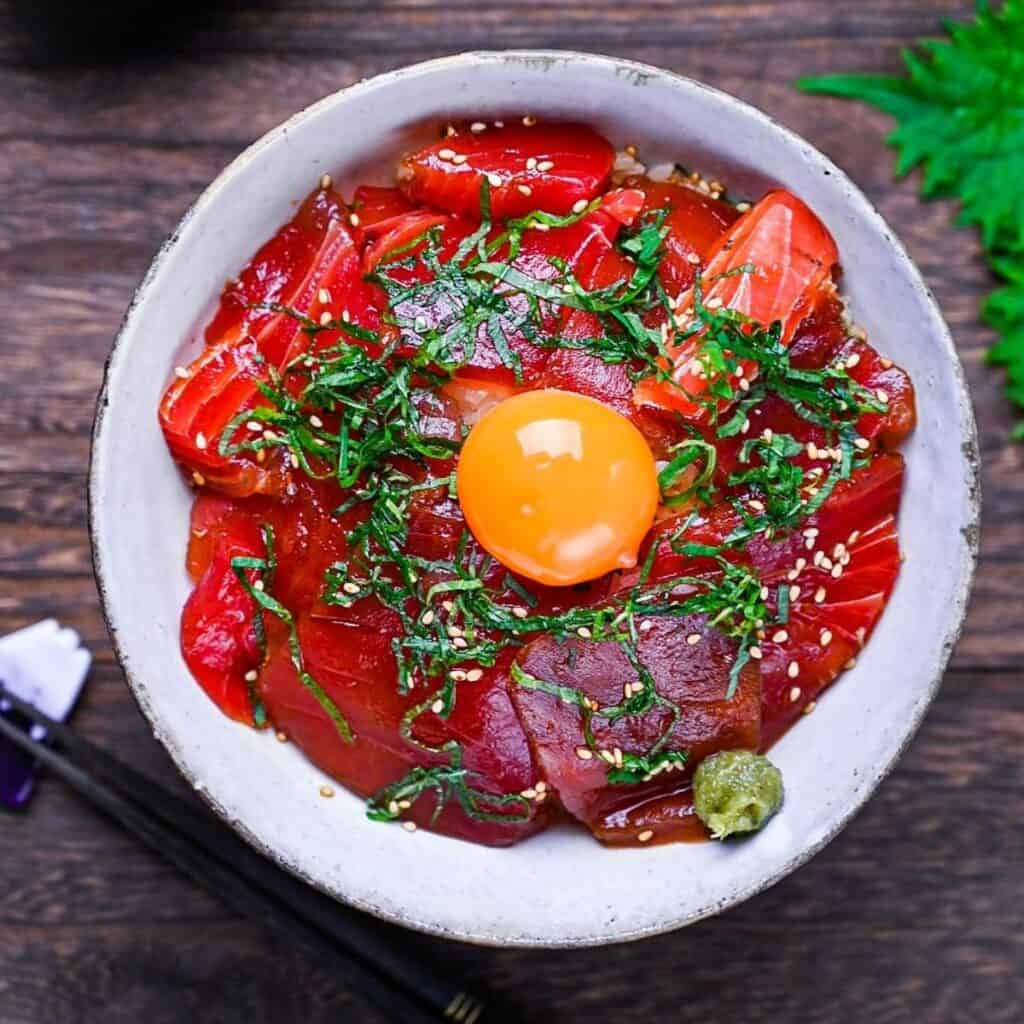 Maguro zuke don (マグロ漬け丼) is a type of rice bowl topped with marinated raw tuna. You can often find it served in teishoku style restaurants or sometimes Japanese style pubs we call "izakaya".

To be honest, this dish is not commonly made at home, even in Japan. However it's extremely simple to make, so why not? You can check out the detailed recipe below! 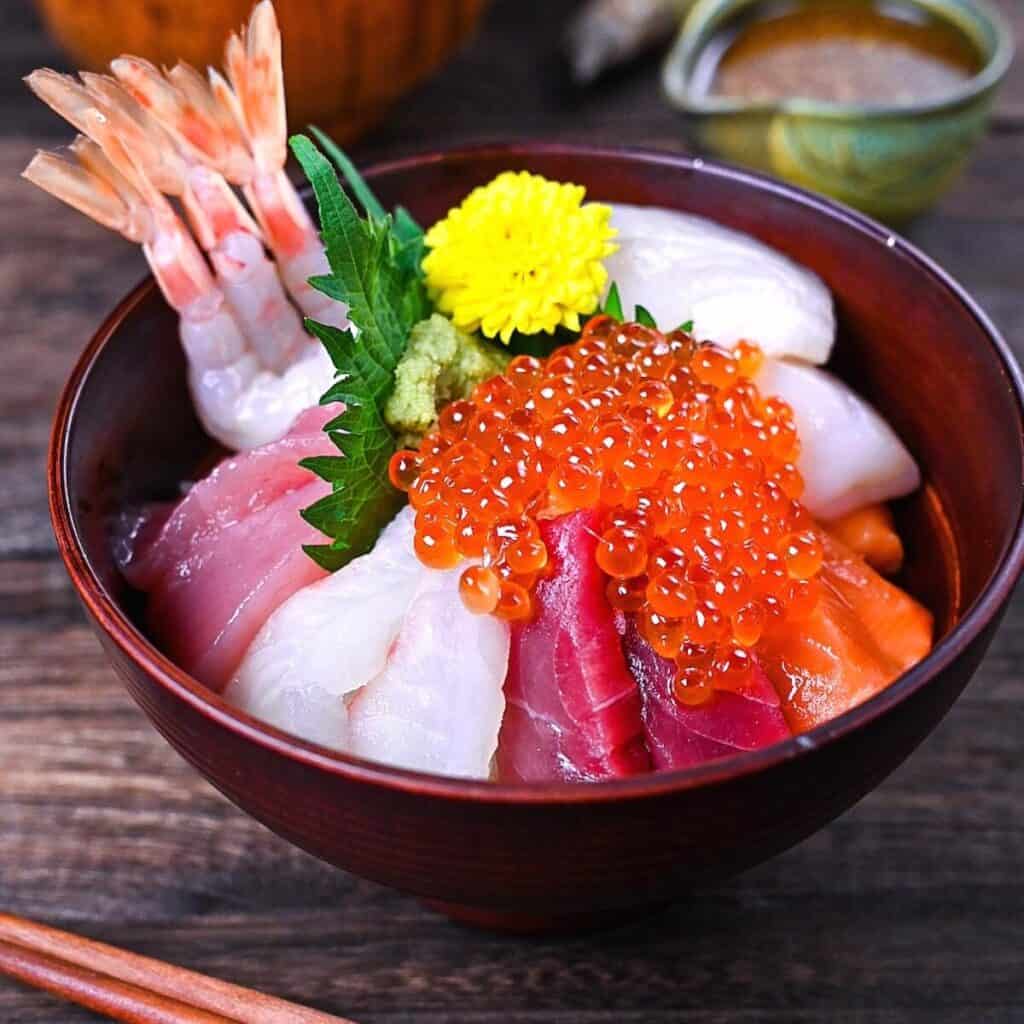 Kaisendon is a colourful rice bowl dish made with a variety of fresh seafood. The fish used vary depending on the region, season or personal preference.

Leave a star rating and feedback or ask a question! Cancel reply

Continue Reading Ponzu Sauce 101: What is Ponzu? (Ingredients, How to make and Recipe Ideas)