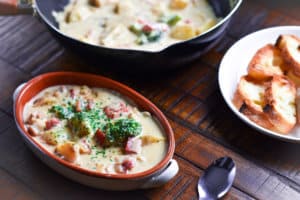 Do you like stew? Sure, we do like warming stews in cold winter and it’s no different in Japan too.

There are mainly two types of stew in Japan

Today, I’m going to talk about the chicken cream stew.

Japanese cream stew is one of many Yoshoku dishes (Western-originated Japanese dishes) and the dish is probably somewhat similar to the French stew, “Blanquette de veau”. However, the main difference between the French version and the Japanese version, is that Blanquette de veau is made with veal rather than chicken.

Also, because Japanese cream stew is supposed to be a family dish, it uses less sophisticated ingredients so that kids can enjoy it too.

These days, Cream Stew is popular enough to be part of school lunch in Japan.

What can be used in Chicken Cream Stew?

It’s very nice to eat it with baguette especially!

If it gets too thick, you can add extra milk to achieve your desired consistency.

This recipe can also be made with salmon.