Hayashi Rice is a rich, tangy and slightly sweet yoshoku-style dish made with thinly sliced beef, onions, bell peppers and mushrooms in a delicious demi-glaze style sauce. Don't be afraid of spending hours making demi-glaze though, this is a shortcut recipe that doesn't skip on flavour!

What is Hayashi Rice?

You'd find this dish in fancy yoshoku restaurants in Japan, but it's also commonly made at home using store bought roux cubes (a bit like the ones you use to make Japanese curry.)

It's usually served with rice and eaten with a spoon.

The origin of Hayashi Rice's name is quite interesting. Firstly, it is said that it comes from "hashed beef with rice" or "hashed and rice". It probably became "Hayashi Rice" because back then, there weren't many people who could speak English in Japan.

There was evidence that people translated "hashed" as "hayashi" back in 1900's.

So the most promising theory is that Hayashi Rice came from American Hashed Beef and then, as per usual, people modified the dish to suit Japanese tastes using ingredients available in Japan. As I mentioned earlier, it is served with rice rather than potatoes too. 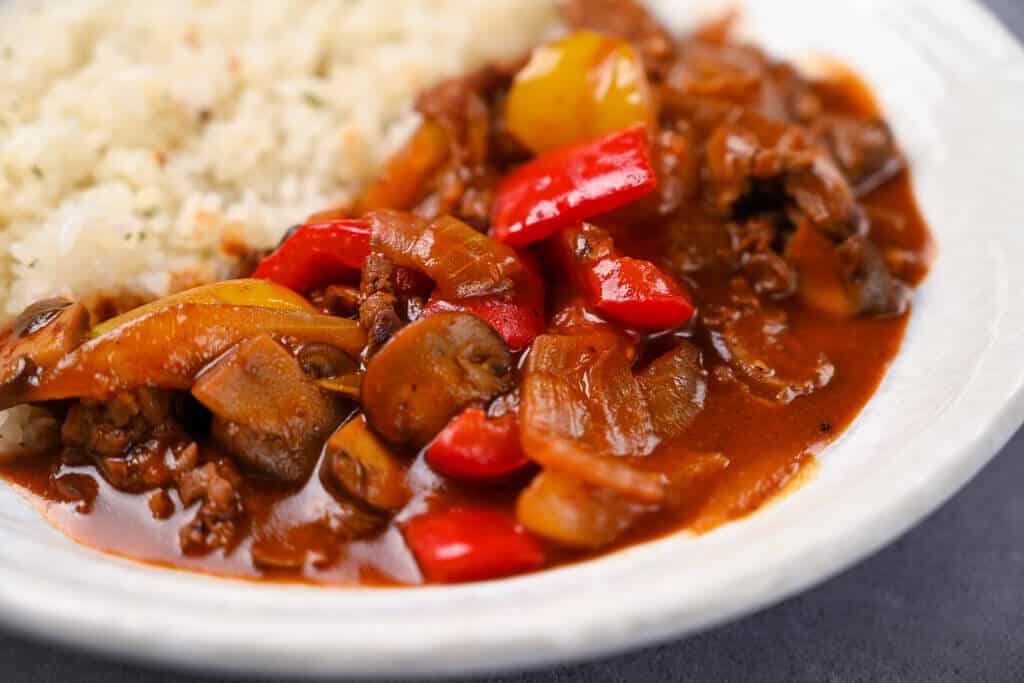 Hayashi rice sauce is slightly sweet, but mainly rich and tangy. Here are a few of the ingredients used in hayashi rice:

So you keep seeing the word "yoshoku", but what does it mean? Yoshoku (洋食) is a type of Japanese dish with heavy Western influence.

The funny thing about yoshoku dishes is that you'll probably only find them in Japan! Most yoshoku dishes are unheard of in Western countries or resemble a dish with a completely different name. Yoshoku dishes have also been created to suit Japanese taste.

Here are some famous yoshoku dishes you should definitely try out!

The thing I like about yoshoku dishes, is that they suit Japanese tastes and Western tastes!

If you combine hayashi rice and omurice, you can make a whole new dish that we called "Omuhayashi".

You simply make omurice as usual (you can omit the chicken though) and then pour the beef hayashi stew over the top. It's seriously delicious, it's a double combo!

Hayashi rice is usually served with plain, white steamed rice and I've written a post on how to cook Japanese style rice here.

But I wanted to make this dish a little more special and indulgent, so I fried the rice for a few minutes with butter and one clove of garlic. I have to say, it's subtle but really compliments the hayashi beef!

You can also use left over rice for this, so it's convenient too!

How to make rich and tasty Japanese Hayashi Rice. Tender beef simmered in a tangy sauce with bell peppers, button mushrooms and soft onions served next to a bed of tasty garlic butter rice. (serves two)

If you're cutting the beef into thin slices yourself, freeze for approx 30 minutes it firm it up and slice as thin as you can.