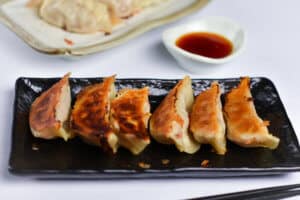 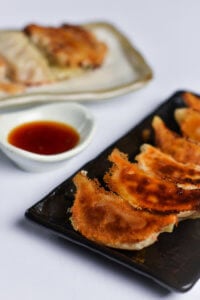 As I said before, gyoza are pretty versatile and you can make them how you like! So here are some popular fillings.

Although only very few people make gyoza wrappers from scratch in Japanese home cooking (use pre-made wrapper instead), you can also make your own wrapper too!

If you’d like to try and make your own wrapper, here’s the recipe for how to make gyoza wrappers from scratch.

It’s best to eat hot. I personally re-heat if they get cold.

How to make crispy on the outside, juicy in the middle, pan fried Japanese Gyoza Dumplings

To make the filling

This recipe is to make 32 dumplings, so about 8 gyoza per person per meal. You can always put extra in the freezer for up to 1 month and cook from frozen for a little longer in the frying pan.