What does Nabe mean?

Nabe (鍋) can literally be translated as "hot pot" in English. It refers to the cooking utensil, as well as the dish itself. So nabe is cooked in a nabe, if that makes sense.

Before the modern period, a lot of Japanese houses had Japanese style hearth called "irori" (囲炉裏). This hearth was used as a cooking tool, light source or heating source in the winter.

You can see the Japanese "irori" in the middle of the room in this picture.

The oldest record of a hot pot dish goes all the way back to 17th century, but it's believed that cooking pot dishes using the hearth was common before that. Hot pot dishes not using a hearth started in the late 18th century.

There are so many popular hot pot dishes in Japan that I can't possibly name them all, but these are the very common ones:

There are also "new wave" dishes where they use unusual sauces and ingredients such as:

Literally, the possibility of hot pot is endless! 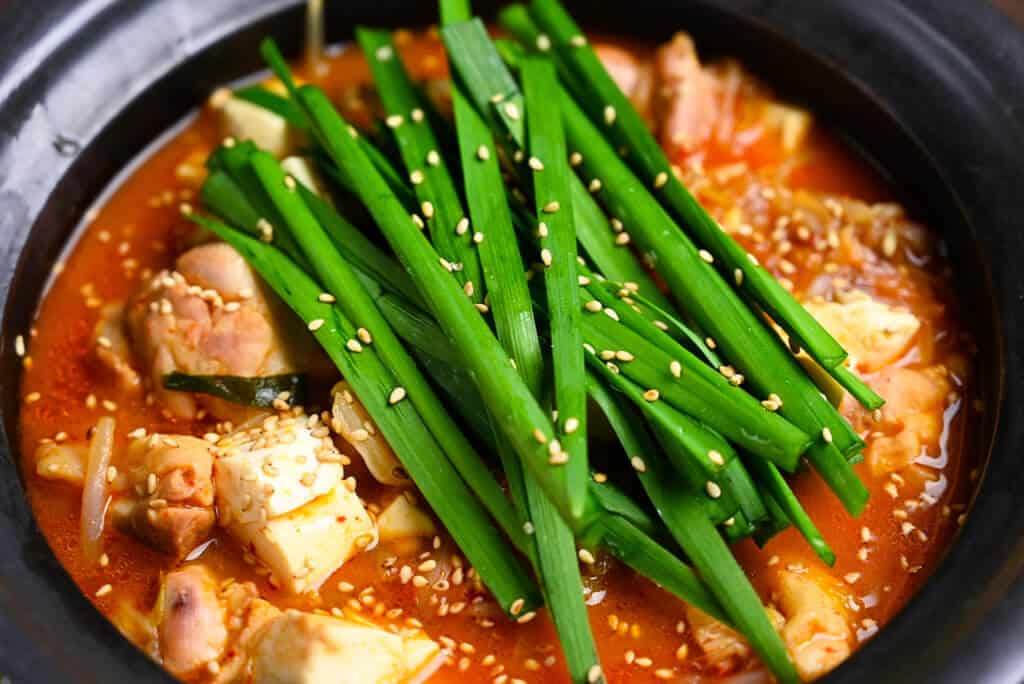 Japanese Twist of a Korean dish

It's so good that it became very popular in Japanese home cooking, then I can even say it's a very common dish to make during winter in Japan.

The Japanese version tends to use miso to soften the spiciness and also the meat is cooked directly in the soup.

Beer as a secret ingredient!?

This might be unbelievable, but there's a new trend that beer makes hot pot tastier.

The idea is the beer yeast, more specifically amino acid in beer yeast has a big potential to create umami. To be honest, it might not be a surprise seeing as some European stews use beer too.

Well, the point is, it's good so I used it in today's recipe!

(If you don't want to use alcohol in your hot pot, you can replace the beer with water or even dashi stock or chicken stock.)

This recipe uses ingredients such as:

But you can easily use alternative ingredients, there is no rule for hot pot! That's the beauty of it!

Here are some other recommended ingredients:

You can add or reduce according to your preference and the availability of ingredients around your area.

Check out our video for How to make Kimchi Nabe

Warm up on a cold winter's day with this delicious, warming and filling kimchi hotpot. Made with tender chicken thigh, firm tofu and packed with vegetables, it's not only tasty but nourishing too. The broth also contains a secret ingredient and you'll be surprised how well it goes!

As this dish is a bit spicy, it goes well with rice. But you can always add noodles to the pot if you wish.

You can use another meat instead of chicken, this dish is usually made with pork belly. You can also use seafood! And if you want to completely omit meat and make a vegetarian version it will still be tasty.

If you don't want to use alcohol in your cooking, you can use non-alcoholic beer too. If you really don't want to use beer at all you can replace the beer with water or even dashi stock / chicken stock for a deeper flavour.