Hey guys, today’s recipe is for  one of my favourite sauces, tartar sauce. Whether it’s with English fish and chips or Japanese Ebi Fry, I’d say that tartar sauce is a sauce loved all over the world!

What is Tartar sauce?

Tartar is a thick, creamy and tangy sauce that pairs very well with seafood, especially of the deep fried variety. Tartar sauce originated from France and has made its way all over the world. (for good reason!)

What are the main ingredients in Tartar sauce?

There are many variations of tartar sauce, but the main ingredients used in the UK are:

How is Japanese Tartar Sauce Different?

Of course the base of the sauce is very similar, but Japanese Tartar sauce omits some surprising ingredients! Maybe because it’s hard to get capers in Japan, but there’s also some additional ingredients that you might not expect.

So, although some recipes do contain pickles, the main crunch in Japanese Tartar sauce is onion!

In addition to mayonnaise, Japanese tartar sauce contains boiled eggs. The egg yolk is mashed and mixed in with the mayonnaise. That’s what gives it more of a yellow colour.

Then the egg whites are finely chopped and add an extra texture to the sauce. 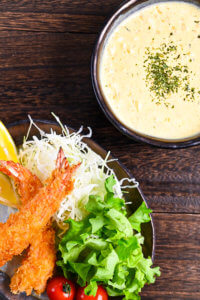 Which one is better?

They’re both delicious! But for Japanese dishes you should definitely try the Japanese version!

How to make tangy Japanese Style Tartar Sauce from scratch.

If you want to soften the onion taste you can soak the onion after its been finely diced. (make sure to dry it well before adding it to your sauce) or reduce the amount to 18 of an onion.

Homemade tartar sauce can be kept in the refrigerator for 1-2 weeks depending on the freshness of your ingredients!