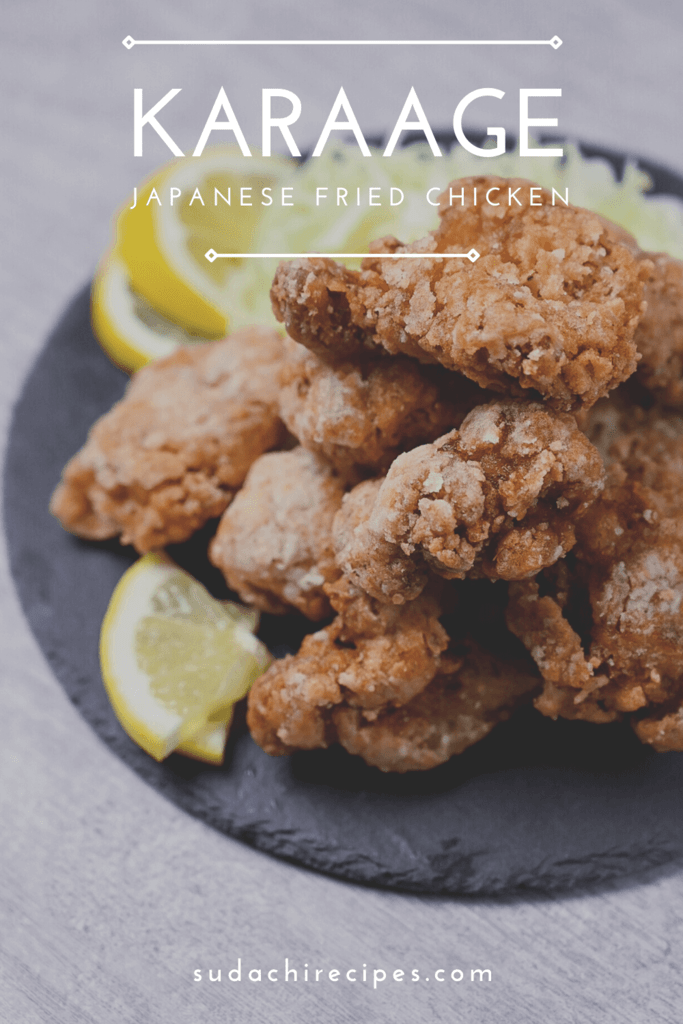 This is a very special recipe for me.

Not only is it my family's recipe, but my first ever dream when I was kid was to open my own karaage specialty food stand.

At that time (More than 20 years ago), it sounded like a very strange dream to have, but here now in 21st century, karaage specialty food stands have become the biggest ever in Japan.

Maybe I should have pursued the dream really but you know, I was like 5 at the time (You can call me genius :p).

Karaage is still my favourite dish of all time and I could pretty much eat it everyday, literally.

So what is karaage?

Karaage (から揚げ) is actually a cooking term which means to fry without a batter (unlike tempura). Usually the meat is marinated and then coated in flour or starch.

It's simple, but it creates the best fried chicken in the world in my opinion!

Karaage can also be pork, and vegetarian soy meat versions are becoming more popular, but if you go to Japan and see "karaage" written somewhere, it pretty much always means "fried chicken". 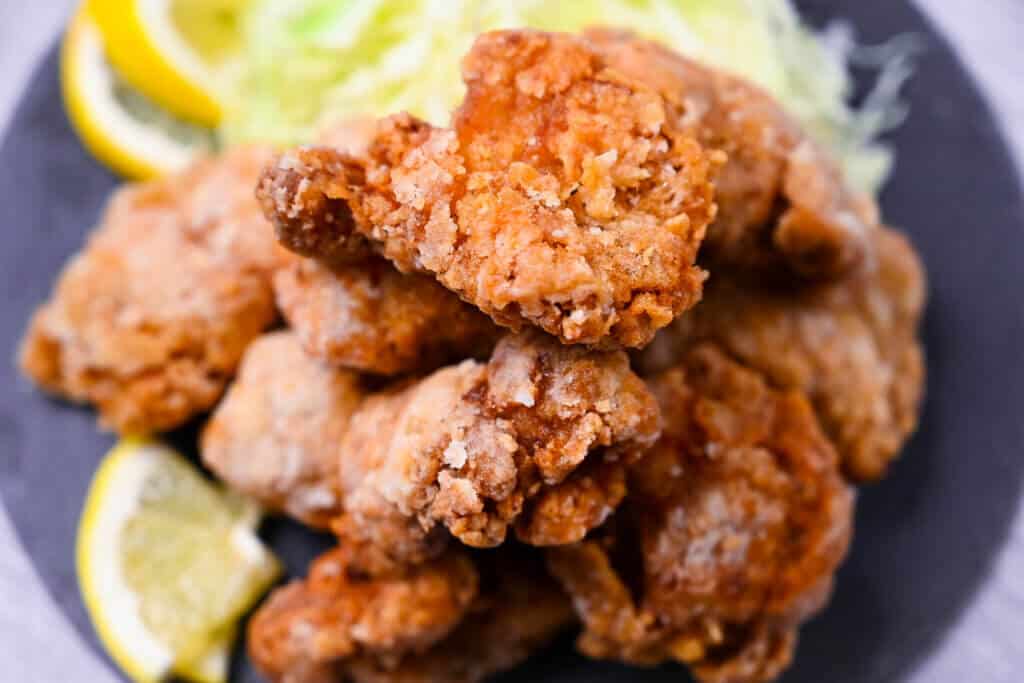 I'm sure most people would be tempted to use plain flour for coating karaage, but really, if you want to achieve the lightness, crispiness and authentic texture of true karaage, you should definitely use starch.

There are a few options to choose from:

Each one will yield slightly different results but they all work well. My favourite is potato starch and that's what I use in this recipe, but you can substitute for any of the above.

There are many different ways to cook karaage out there, but my favourite way is shallow frying and this is how karaage is cooked in most Japanese homes.

I'm going to share my secret to achieving the crispiest texture without double frying.

This technique makes it seriously crispy. It's so good, I also use it when frying "Nagoya Style Chicken Wings", check out the recipe here! The crispiness will have you dancing in your seat! 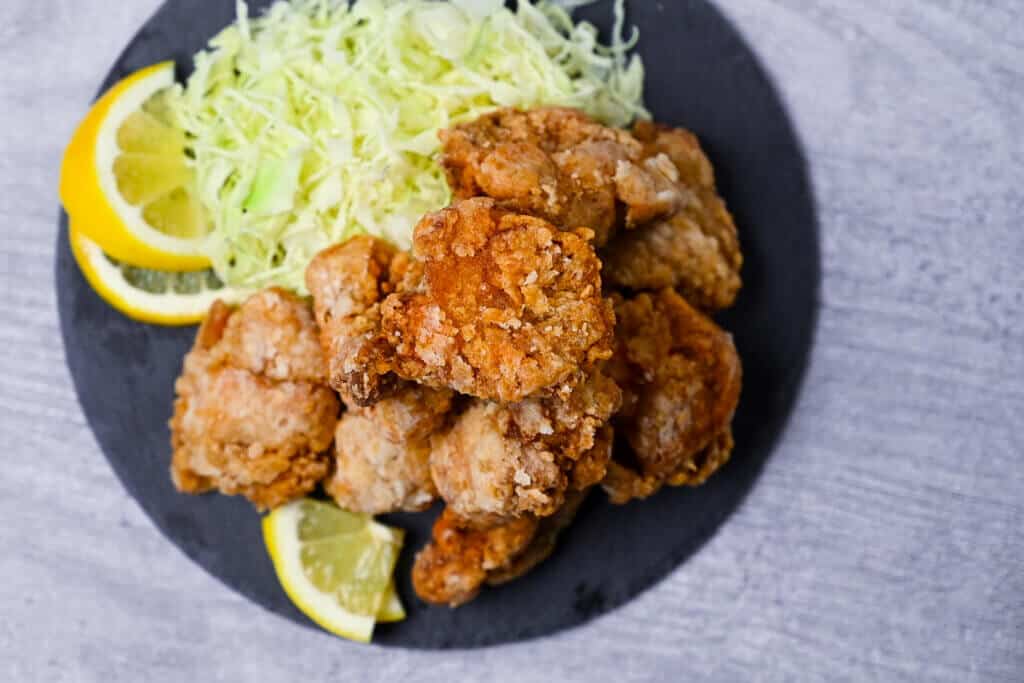 You can technically make karaage with any part of the chicken, but for the best results I recommend using chicken thigh with the skin on.

Chicken thigh is like, the juiciest and tastiest part of the chicken and it's just perfect for karaage.

Not to mention, if the skin is on it becomes just.so.crispy! It's out of this world.

Of course if you want to use this recipe for wings or drumsticks, it's good. (Just don't forget to increase the cooking time for thicker meat.) But when it comes to using chicken breast, of course you can still do it, but don't expect it to be at the same level as chicken thigh in terms of juiciness and crispiness.

The most common flavours are:

But these days, there are many other flavour twists. You can find things like:

One thing to note is you don't want your karaage to be overpowered with too much flavour, I actually think simple is better for this dish. You also don't need to marinate any longer that 30 minutes, 30 minutes is pretty much the perfect amount.

Today, I'm going to tell you the most basic way to make authentic karaage with a soy base, if you like fried chicken in general, it's definitely worth a try! 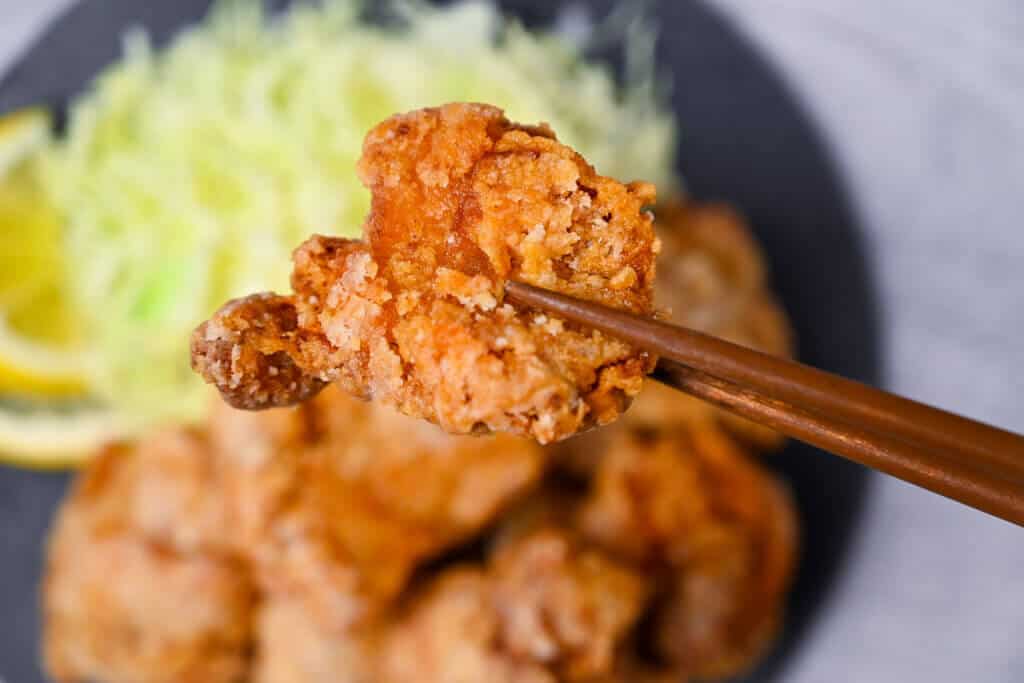 If you make this recipe, there's different ways for you to enjoy it!

In the unlikely event that there are leftovers, you can freeze karaage put it in the refrigerator and eat within 3-4 days.

If you microwave it, it will lose some crispiness. I usually microwave it to warm up the middle and then put it under the grill to crisp the outside up again. BUT in all honestly, this karaage still tastes great cold haha.

If freezing, you can keep it for 3-4 months.

What does Karaage mean?

Japanese Karaage Association defines Karaage（から揚げ or 空揚げ） as "Dishes that are lightly sprinkled with flour or starch on the ingredients and fried in oil."

They also state that "In general, many people imagine Karaage as deep-fried chicken, but it is by no means limited. Other type of meat, Fish, Vegetables can also be called Karaage.

How do you pronounce Karaage?

What is the difference between Katsu and Karaage?

There are a few differences between Katsu and Karaage, but the biggest difference would be meat is coated with flour, egg and panko for Katsu but at least panko is definitely not used for Karaage.

Does Karaage have bones?

Boneless chicken thigh is mostly used but some people might use drumsticks or wings, so in that case yes.

Watch "How to Make The Ultimate Karaage" Instruction Video

Juicy chicken thigh marinated in a Japanese soy based garlic and ginger marinade, coated in a thin layer of potato starch and then fried at two temperatures for the ultimate crispy karaage fried chicken!