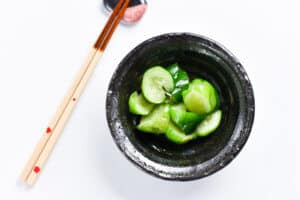 For traditional Japanese cuisine, pickles are a very important element.

Although, the very first history is unclear, it is said that similar things existed 3000 years ago! And in medieval times, there were already many kinds of pickles to help preserve vegetables.

There are two different styles for pickles in Japan

And today’s recipe is in Asazuke category as it’s quick and easy at home.

These days, people make pickles with different flavours (some of them are interesting) 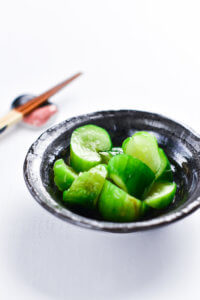 Even though it’s simple, pickles are one of the most popular beer snacks in Japan.

Proper drinkers always opt for pickles rather than heavy snacks and yes, it does go well with beer because of the strong salty taste.

Or people like to have pickles as a side or with plain white rice too!

Wasabi pickled cucumbers are one of my favourites.

It has the distinctive spiciness of wasabi with nicely sweet flavour of standard Japanese pickle.

It’s easy and flavourful, I recommend to have it with beer or plain white rice! 🙂

What are Japanese pickles called?

The first ones are not fermented, and the latter is mostly fermented in the process.

How to make Japanese Wasabi Pickled Cucumbers with a spicy kick!

This recipe makes enough for about 6 side dish servings.