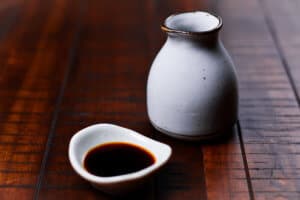 Tsuyu is a versatile sauce used in many Japanese dishes. I’ve always had trouble finding this sauce in the U.K. so today I want to share with you how to make this sauce from scratch, it’s pretty simple and gives dishes a deep Japanese flavour.

Tsuyu has a perfect balance of savory and sweet. It is often used in the following dishes:

I’ll be using this sauce in upcoming recipes and you can also search ‘tsuyu’ in the search bar to find all the recipes that use it. It’s a useful recipe to know!

These ingredients are commonly used in Japanese cooking and should be available in Japanese food stores or possibly Asian supermarkets. 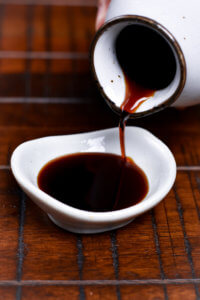 In this recipe, we’ll be using dried shiitake mushrooms as they are the most easily accessible in other countries. If you can’t find them then you can try with other kinds of dried mushrooms (but I can’t guarantee the taste!)

This recipe only uses 4 ingredients and they are all suitable for vegetarians and vegans, so enjoy!

Tsuyu, also known as Mentsuyu is a sauce that is often used for dipping sauce or soup for Soba dishes or Udon dishes. But it’s also used for various stewing type of dishes in Japan (Eg Nikujaga).

It’s similar to soy sauce, but it’s sweeter and can taste more depth of flavour.

How to make Japanese Tsuyu Sauce from scratch

This recipe is suitable for vegans and vegetarians.

This sauce can be kept in the refrigerator for up to one month.

If you want to use the tsuyu as a noodle dipping sauce it should be watered down, I recommend 1 part tsuyu to 2 parts water.

If you want to try making tsuyu with bonito flakes or konbu, the method is a little different. You add them to the pan when boiling the soy sauce and mirin, whereas the mushrooms should NOT be boiled. Once cooled you simply strain the sauce and store in the refrigerator over night.

The prep time in the recipe is the cooling down time.